Both of my 5 series E61 BMWs had Head-Up Displays. They are quite affordable, if you buy a six year old car. Not only the automobile itself, but also the optional equipment is subject to deterioration after all. 😉

Cars of that brand, based on that (also 7 series) platform, come with all sorts of bells and whistles, but those projectors are really beneficial. However: the full colour graphic display used here was also over the top. (I just have the german price list from 2009 here and it says 1.340,– €, VAT included.)

Meanwhile I drive an F20 1 series and while the two extra gears of the automatic transmission (yes, eight of them!) are excellent and compensate somewhat for two less cylinders, I really missed the speed info on the windscreen.

Additionally: the E60/E61/E62/E64 had a hint for you about coolant temperature. The shaded area of the rev counter faded away more and more the warmer the engine got. You knew that you could floor it, once only four lines remained. If you started without pre-heating in winter, the dashes were somewhere between 3500 and 4000 RPM.

As I intentionally went without an ex factory navigation system (I don’t need it for commuting – cheking Google Maps before is totally sufficient) speed and temperature were my only requirements.

By now there are quite a few solutions available:

Searching eBay (DE) listed a few lone importers of chinese products (similar to the Lescars, iFound, …) and Amazon a lot of them – to my surprise there were no flags to tag the dealers selling directly from the other side of the world (on their conditions, with 21 day delivery time). And after nearly buying in Asia via the Amazon Marketplace, I decided to take the risk, but deny them their share.

I read a few reviews at Amazon, and they where not encouraging. But I also realized, that there were absolutely no brands or type designators whatsoever.

This was, again, a reason to take the direct approach: I wanted the latest version of… yeah, that one there…

At dx.com (DealeXtreme) there was a version that finally offered a useful addition to speed, coolant temperature and maybe battery voltage: an integrated ELM327 Bluetooth dongle.

Payment via PayPal was OK for me, you don’t even need an account at DX, and three weeks later a package with customs stamp (“gift”, “product samples of no commercial value” or whatever) arrived.

But would it work? Time to find out.

Finding a position in the 2012 1 series is not easy, as the instrument cluster is styled to go right to the windscreen. I had tested this with my LG P880 (“Optimus 4X HD”) Android phone and DigiHUD Speedometer. The 5.5″ device from the PRC was even larger.

…but it was also much brighter. You can use this without the reflective film (if it is not really bright outside).

The package says “dispaly” and the manual is not that good either, but you can derive how to calibrate speed- and rev-display values, switch off that pointless speed warning and enable Bluetooth. Note that in configuration mode the numbers are not mirrored. They assume you do this with the display in your hand.

What (my assumption) the chinese did not have on their radar was the start-stop system. The device is switched into standby via a voltage detector. (I am still waiting for BMW’s battery management to detect that milliamp too much and annoy me with warning messages.) You can define the threshold. But if I leave the driveway in the morning and the engine stops at the next traffic light, the voltage is lower than after the car is parked and locked just after driving over the Autobahn…

Why is the BT-ELM a bonus?

I had an OBD-USB cable for monitoring the Icom JTG LPG system in my Focus ST. Just like in this HuD there was no “ELM327” inside, but a Microchip PIC18 microcontroller emulating that IC. Dragging along your laptop computer was OK in 2007, but in 2015 you use Torque or something similar on your Android.

Getting supply voltage and speed info via the OBD2 connector is an apt solution for retrofitting a Headup-Display, but it prevents you from e.g. reading and clearing error codes via OBD. No problem here!

After activating the Bluetooth module by setting “parameter 12” from 0 to 1 or 2 you can pair your device. When the bond is established, you can select the interface. The display is deactivated when it has a BT connection. It seems that the BT-channel has access exclusively then. Seems to work with Torque Lite, I did not do any long-term tests however. 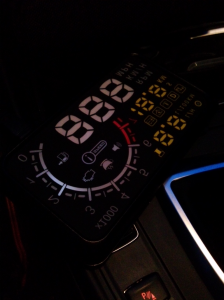 The reflections of the yellow print in bright sunlight bugged me and I had a simple solution in mind (no, not as simple as using Edding), so I started a teardown:

There are just six tiny screws on the back – be cautious not to break the fixing points! 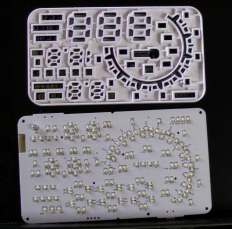 We had some black cardboard left, so I needed the outline of the film to cut a mask. 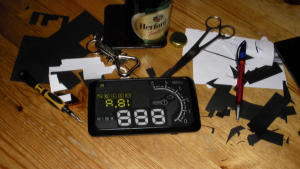 Calculating the fuel consumption in the HuD does not make sense to me (I have enough statistics ex factory, even without the “Efficient Dynamics Edition”), I don’t care about MPH and the Diesel engine of my 120d cannot reach 7500 RMP (at least not on it’s own 😉 ). Why is there a “coffee” icon? This doesn’t cook coffee. And I don’t need breaks if the road ahead is clear enough. ^^

The black cardboard rises a bit, because it was rolled up for some time. But basically it works.

Next step: plastic foil. Let’s see how much that reflects… 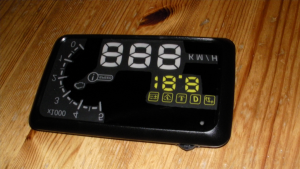 Actually it does reflect when hit directly by the sun. I scanned three versions of the masking, if somebody else would like to have a try, but in the end I went back to just switching off the (useless) fuel consumption display and blanked out the arc at the rev display.

But first: the reflecting film.

On a rainy day I finally squeegee’d / wet-glued it onto the windscreen. Looks odd from the outside, but from the driver’s seat you look right through it indeed.

Covering the arc of the rev counter was a good idea…

…but that could be made better. By threading a piece of black foam though the white plastic masking right behind the printed foil. As the (panel) foil is matte on purpose this was still the best option in direct sunlight. 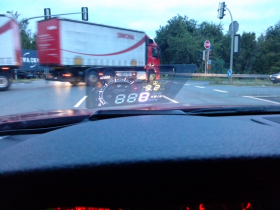 The automatic brightness adjustment did not work. And after attaching the reflecting film it was becoming mandatory at night.

So I also took a closer look at the sensor – and found a short circuit. After removing it the two possible brightness settings were switched automatically. 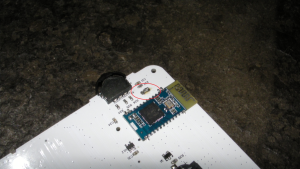 But even maximum brightness and the film will not beat the sun. And I guess this is the reason why a proper HuD is much more expensive: not only is the reflective film embedded in the windscreen (effectively invisible), but the projector is also always able to show the numbers. At least the expensive BMW E61 HuD did work in that way. 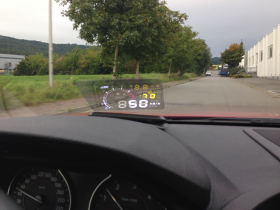 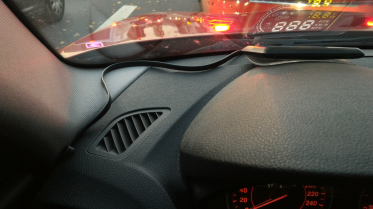 2 thoughts on “Re-gaining a head-up display after shrinking the car, via OBD”

This site uses Akismet to reduce spam. Learn how your comment data is processed.